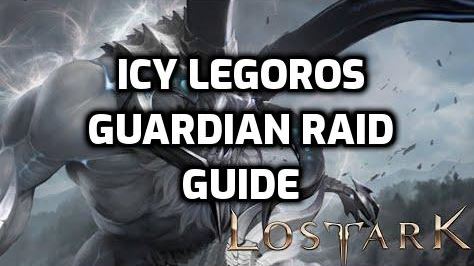 In this Lost Ark Icy Legoros Guardian Raid Guide, we cover everything you should know about the boss encounter including how to find a group, boss fight strategy, and loot from Lumerus.

You can sign up for a Icy Legoros raid by opening the search for party screen and selecting Guardian Raids, as explained in the Lost Ark Guardian Raid Guide.

As Icy Legoros is the third Lost Ark Guardian Dungeon boss, you are now familiar with how these dungeons and raids work, and you should get to at least item level 380 or higher before starting this raid. Make sure you put together a party before heading in.

Make sure you are all set up with the gear you want to use, the potions and battle items you will bring, and the Tripod skills you are going to want to use within the raid before signing up!

Icy Legoros will turn at the person who is holding aggro, roar, and jump into the air. He will then land on someone in the party. If you are landed on, you will be stunned.

Counter Measures: Spread out when this happens to he doesn’t land and stun the whole party.

He will look at the player that has aggro, stomp on the ground, then jump 3 times toward the player he is targeting.

Counter Measures: The jumps are more like short hops, so run away from him when this happens and he shouldn’t be able to catch up to you;.

Icy Legoros will shutter his body, then charge a player. Sometimes when he is lower health, he can actually do this three times in a row.

Counter Measures: If you can see him starting this pattern, move out of the way he is facing.

He may turn to his right about 90 degrees and swipe at a player once.

Counter Measures: Try to be behind the boss to avoid this swipe.

Icy Legoros will swipe with his right then his left claw, directly in front of him.

Counter Measures: Stay behind or to the back side of him.

Counter Measures: Pretty simple, its the same as the double swipe, just try to avoid being in front of him.

Icy Legoros will almost do a 360 degree flip / hop backwards, then he will shoot an icy blast from his mouth directly forward.

Counter Measures: As soon as you seen him begin the 360 hop backwards, dodge out of the front of wherever he was facing.

When you knock down or break the boss, when he finally recovers from it, he will create an AOE of ice from the ground in all directions immediately surrounding him.

Counter Measures: Try to keep a distance when he is down if you are ranged. If you are melee, try to get out of his immediate range before he recovers.

Icy Legoros can complete the Icy Explosion without being broken / knocked down. He will essentially howl, raising his head up to the sky, then turn 180 degrees. He will then have a chance to create the icy explosion.

Counter Measures: Look for the howl and try to run away out of immediate range to avoid a potential explosion.

The following is the potential loot table for killing Icy Legoros in Lost Ark and finishing this Guardian Raid: