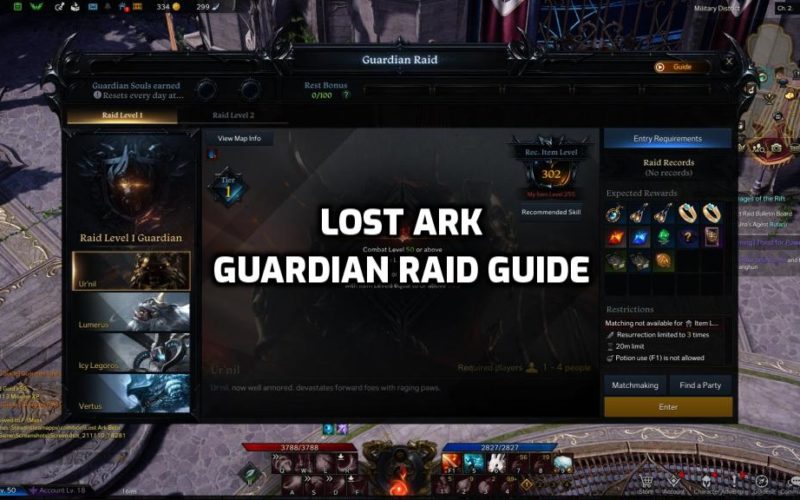 In this Lost Ark Guardian Raid Guide, we cover everything you should know about Guardian Dungeons including when you can go to them, how often you can go, and what kind of loot you can expect.

In a Guardian Raid, you are fighting a specific boss, rather than a massive horde of enemies like in a Chaos Dungeon. Each Guardian Raid will feature a different boss, and you will want to know about them before rushing in to fight them.

When Can I Go To The Guardian Raid?

Guardian Raids are next up to complete once you have either a few Chaos Dungeons under your belt and have reached item level 302 or higher, or you have completed the World Quest Line and obtained your iLvl 302 rare armor from those quests. You must also be level 50 of course.

Make sure you are all set up with the gear you want to use, the potions and battle items you will bring, and the Tripod skills you are going to want to use within the dungeon before signing up!

How Often Can You Do Lost Ark Guardian Raids?

You can then apply 20 resting bonus on future Guardian Raids runs. If you have 20 Resting Bonus, it will be automatically consumed at the end of a successful Guardian Raid, and you will earn double the soul harvesting.

There are two ways you can sign up to get into a Guardian Raids in Lost Ark.

2. You can actually queue up for any group content from Anywhere in Lost Ark. You do not need to be at the NPC to sign up for a Guardian Raid. The top-right portion of your screen will have a Party Finder icon. You can click this, select Guardian Raids, and sign up here, from anywhere!

In a Guardian Raid, you will be searching and eliminating certain bosses with your party. These are challenging encounters and each raid is different.

You can think of these raids like hunting the boss down. You must search and find the boss, then damage the boss enough to make it to the next phase. At the end of one phase, the boss may take off or the world around you may change and you need to move along, dodge mechanics, and chase down the boss to start the next phase.

After you have completed all the phases, finally pin the boss down and defeat it, you will get your precious loot.

There are currently a whopping 24 levels of Guardian Raids available to players in Lost Ark as of the time of this writing in other regions. In the NA / EU launch, there will only be the first 8 bosses available on launch.

Here are the names of all the Guardian Raid Bosses that will be available in the NA/EU launch of Lost Ark, and as our guides continue to complete, these will be linked to their respective boss guides. You will be able to see what they can drop if you follow to their specific guide link below, otherwise there are too many items to include here.