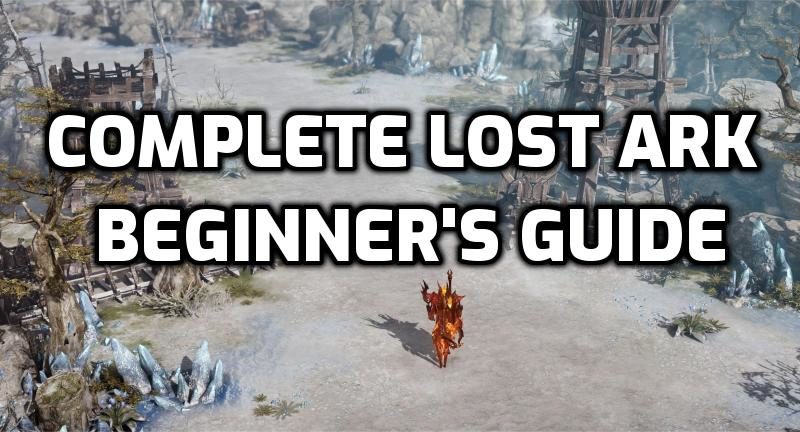 There is so much content in Lost Ark that you may feel overwhelmed before you ever get to dive in. In this Lost Ark Beginner Guide we explore the main concepts introduced in the game, and the driving features you will want to know about before you get too far down the rabbit hole. As there is so much to cover, be sure to utilize the table of contents to quickly jump to what you are looking for.

Lost Ark is a Massively Multiplayer Online Action Role-Playing Game (MMO ARPG). It uses an Isometric camera bring a quarter-angle view similar to that of the ever-famous Diablo games. While Amazon Game Studios has brought Lost Ark to the West for the NA/EU release as the publisher, the game developer is Smilegate.

Lost Ark had been out in Korea for 3 years, and out in Russia for 2 years at the time of the NA/EU announcement. It has had time to polish itself unlike some of the challenges New World as come across after launch.

Unlike games like World of Warcraft, there is no tab-targeting system in Lost Ark. This means that you actually have to aim your shots and skills rather than just blindly pressing your cooldowns on the enemy.

There are so many classes in Lost Ark and more to be released constantly. Every class is completely original and changes the way you play the game. Every new class is a new experience and tough to master.

At the launch of Lost Ark NA / EU, there are 15 playable sub-classes that stem from 5 main class types. Here is the list of all playable classes in Lost Ark NA/EU Season 1:

For the full breakdown of these classes, be sure to check out our Lost Ark Class Guide here at The Games Cabin:

All of the combat stats will affect how much damage you are outputting as well as your survivability. Make sure you check out guides for your specific class if you are interested in optimizing your build to maximize the two basic stats of Attack Power and Max HP.

Lost Ark is much like any other MMO where you will need to level by following quests and/or grinding mobs. There are a total of 50 levels for your character to progress through. The leveling experience in Lost Ark is just a very small part of the game. You can get to level 50 relatively quickly if you know what you are doing. Think of this as a mini Lost Ark Leveling Guide.

There are two major sections of leveling, so we will break down the Lost Ark levels accordingly

This Lost Ark Beginner Guide would not be complete without explaining the fastest way to level in Lost Ark from the very beginning. During level 1-35, you can essentially just follow your main story quests. These main story quests show an Orange icon with a downward arrow. If you simply follow only the orange quests, you will get to 35 and be ready for the next portion of level.

While following only the orange main quest markers is definitely the fastest way to level from 1 to 35 in Lost Ark, you probably want to know what all of the other quest markers are for.

The Yellow quest markers are your basic side quests. These quests will offer limited, static rewards in coin or items. These are the least of your worries to get finished. You can come back to do these quests later, but really it will not be worth your time to complete these, even when they are really easy.

The Purple quest markers mark guide quests. These you will eventually want to complete as they introduce new features into the game for you. You may choose to complete these as they come up, or you may pick them up later. If you aren’t going for a world record in leveling, it is suggested you pick these up as they come along and complete them so you can unlock features like pets and trade skills. They also can unlock permanent stat increases that you will want to make sure you have to push your character to be that much stronger.

Yellow quest markers with a circle around them represent chain quests. These you can skip, but be aware that they offer some powerful rewards. If you complete these along your journey, you can obtain good gear to help you, as well as even some permanent stat increases. You can leave these for later to pick up, if you want to level as fast as you can, but make sure you come back at level 50 to finish any of these that you left behind to make the most of these juicy stat increases.

Once you reach level 35 and have completed the required main story quests, you will eventually get to a quest that allows you to sail the open seas! You will get your very own ship that you can sail to many islands and continue on your journey.

At this point in the game, the main story quests are no longer orange markets, they are blue with the image of a globe. Continue on the path to follow these blue quests, as they will offer more and more EXP as you level higher. They are proportionate to your level and will continue to give much more EXP than other side quests. If you continue to follow these, you will hit level 50 in Lost Ark as fast as possible.

When you finish the blue world quests, you should be close to level 49 with 55% through the level. If you are not at least 55% through level 49, go around and complete any yellow side quests you can find in the higher level areas. You will need to get to this 49.55 point before the next step.

Once you reach level 50 and enter the End Game in Lost Ark, you will want to make sure you are tackling as many daily tasks as you can. Don’t feel too pressured to do so, you won’t lose anything for missing them, but they will certainly help progress your main character further each day you do them.

The dailies in this Lost Ark Beginner Guide are activities that you can do only a limit amount of time per day, then you will have to wait for the next day for them to reset so you can tackle them again.

Trade Skills – Unlike many other MMOs, your trade skills such as Mining, Logging, etc. have energy. You can gather each day until your energy is depleted.

Rapport – You can play up to 5 songs per day and perform up to 5 emotes per day for NPCs. Performing these actions will increase your Rapport with the NPC, and allow you to gain rewards and reputation with them. This is a great way to make gold in Lost Ark as many NPCs will give 100-200 gold when you reach a certain level of rapport with them.

Adventure Island – Only Available at certain times Sat-Sun at 2PM / 9PM, Mon-Fri at 9PM. Visit an island of your choice for the chance to get Unbound Destruction or Guardian Stones, Gold, Silver, EXP Potions, and more!

Chaos Gate – Only available on specific days. You can receive loot only once per day it is open. Here you can get Chaos Fragments, Treasure Maps, and Frenzy Runes. Any gear enhancements, jewels, tripod levels, and cards are not applicable within the Chaos Gate

World Bosses – Sometimes there will be world bosses available around the world of Lost Ark. You can participate in killing them and receive loot one per day. You can get items like Bleed Runes, Destruction or Guardian Stones, Card EXP, etc.

Voyage Cooperative Missions – These can be completed multiple times per day. You can obtain Gateway Keys from these missions and spend them at a separate sea event later to obtain additional rewards. If you have multiple Gateway Keys, you can use them all together when you are at a Gateway.

UNA Daily Tasks – Every day, there are 3 daily tasks you can complete. This can be upgraded to be 6 daily tasks if you purchase the upgrade in the Cash Shop. You can obtain Una’s Task Rewards and EXP Potions from these. On your main character, you should complete tasks that give Leap Stones or Fragments.

Guild Support – You can perform 1 donation and research support each day. You can get Silmael Bloodstones from this action. Always pick donating 6,000 silver and completing research support.

Guardian Challenge Mode – 1 per week available per boss, 3 bosses total. You can complete these per character but must be at least 460 iLvl.

Abyss Dungeons – 3 attempts per week, per dungeon. For the any dungeons that have both Normal and Hard modes, you can only complete one difficulty per week. Again, this is per character, so you can run this more times if you have alts. You need minimum 340 iLvl to enter Abyss Dungeons in Lost Ark.

Challenge Abyss Dungeons – 1 attempt per week per dungeons. You must be at least iLvl 915 to access these dungeons. Every other week the dungeons that are available will cycle. Each new week has 2 new dungeons.

Abyss Raid – 1 attempt per week per Abyss Raid. If you have multiple characters, you can do this once per character as it is character locked. Minimum iLvl of 1370 to complete this challenge.

Legion Raid – 1 lockout per week, per character. Any sets you gain from this raid will not be able to be sold. You can get gold, accessories, ability stones, set crafting materials, chaos stones, and fusion leap stones. You must have iLvl 1415 or higher to go to the Legion Raid in Lost Ark.

Una’s Weekly Tasks – You can choose 3 weekly tasks from Una each week. You can add 1 more task to make it 4 if you unlock it through the cash shop. These availabilities are per character. You will get whatever rewards are given for each task, as well as EXP potions. We recommend you choose quests that reward Leap Stones or Fragments when doing these on your main character.

Weekly Ghost Ship – Every day at specific times, you are able to go to the Ghost Ship. You can only receive loot from the Ghost Ship in Lost Ark once per week, and you must be character level 50. To make the most of this, first obtain the Ghost Ship boat and have a sailor on the ship that provides a major stat boost. Here you can get unbound Destruction Stones, Guardian Stones, the Ilyakhan Legendary Card, and heroic and legendary seal books, as well as bound training auxiliary materials.