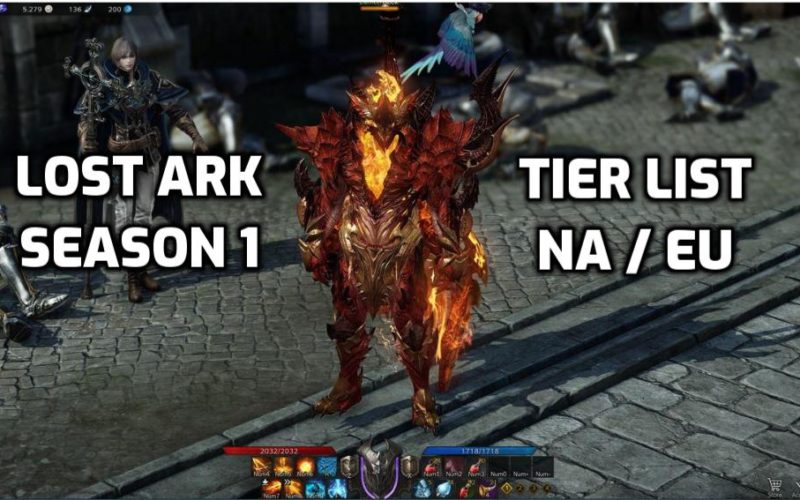 Welcome to the first installment of the Lost Ark PvE Tier List for NA/EU Region. Here we will cover Season 1 of Lost Ark, and rank the classes in the traditional tier list format so many of you are familiar with.

The first thing you should note if you are a new player, is there are really no classes that underperform so greatly that they are left out of content. Lost Ark is one of the best games for class balance, and it really shows in the polls of how many players play each class.

99% of the Lost Ark content can take any set of classes and players are not picky about class makeup. If you expect to be in the top 1% of Lost Ark players for PvE in NA/EU, then these rankings may be useful to you.

The class balance will change with each major patch and season, or “tier”. We will release new, updated Tier Lists for Lost Ark NA/EU as new patches come along. You should always play the class you think you will enjoy the most based on its playstyle, because no class will reign as king forever.

If you are a new player, be sure to check out our Lost Ark Beginner Guide to familiarize yourself with leveling and what to do when you eventually hit max level 50!

This tier list weighs each class by the following metrics:

The Bard is one of the top wanted classes in any party and is one of the Top Tier classes in Lost Ark. Mega healing and shields, damage buffs and debuffs, this class is incredibly useful for group content. Any party is happy to bring a bard along and for good reason. They stand at the top of the class to start the first season.

The Gunlancer has amazing utility DPS, along with interrupts that can even interrupt boss mechanics. With the Gunlancer being the beefiest class in Lost Ark, it is usually considered the “tank” class, even though the term tank is different than you would see in most other MMOs. With amazing defenses, health, and the ability to downright even ignore some mechanics, the Gunlancer is and always will be a top class to play.

The Paladin is almost as good as the Bard when it comes to healing and support. The trade-off you get is that you will have a bit more utility and survivability due to higher defenses and health pool with the Paladin and he comes from the Warrior class.

Berserker is your go-to warrior damage class. They are one of the easiest classes to pick up and play, have high damage output and a lot of stagger damage. The skill floor for this class is already relatively high, so you can be sure that this will be a good class to pick up for people who are new to this type of game.

The Gunslinger is very mobile, strong, and can be played at a mid-long range. Having this middle sweet spot between melee and ranged allows the player to move around boss mechanics generally easier than a lot of other classes. The Gunslinger comes with a 10% crit buff that basically has full uptime.

The Artillerist has very good damage, but lacks mobility. If the class is played properly, it is top notch, however many players struggle to perfect it. If you love high stagger and great AOE gun damage, this class is for you. The Artillerist can even provide almost 100% uptime on their debuff as well as work to shield the whole party against some incoming damage!

The Sharpshooter is what you might think of when you want to play a “hunter” class from World of Warcraft for example. This is a long-range shooter that excels from a far distance. Ensure you set Field of View settings to max in order to maximize how much of the game you see on your screen at once! These settings will allow you to see enemies much sooner than otherwise.

The Striker is a very strong class with great damage output, very fun to play, and not very hard to pick up for someone new to the game. Not much else needs to be said here, Striker is a solid play.

The Soulfist is a very fun class to play, with a Goku from Dragon Ball Z vibe. If you are able to land your skills, especially your Ultimate, this class will absolutely shred in damage output. That is the main trick… hitting your ultimate. The Ultimate is like a Spirit Bomb for DBZ, and takes several seconds to channel before dropping. For this reason, it is hit or miss, but played and timed well, you will see this move up a class or two.

The Shadowhunter is another class that is fairly easy to get into right from the start. It offers decent utility and has the nice ability to gain HP whenever switching to demon form. If you are coming from World of Warcraft, think Demon Hunter.

The Scrapper is a pretty decent melee class, with fast moving attacks and good stagger. The damage is middle-class and their defenses seem to be a bit stronger than some other classes. This is another new player friendly class that doesn’t complicate things too much.

The Summoner class in Lost Ark is easy to use as you can let your summoned beings to most of the work for you. Again, if you are coming from World of Warcraft, think Demonology Warlock here, but way more fast paced.

The Deathblade is a super fun class to play, and the players who choose them tend to love the gameplay. The unfortunately thing about the Deathblade is it doesn’t output as much damage as you would expect from a class that has such utility. Think rogue or assassin class when you think of Deathblade in Lost Ark.

The Wardancer comes with a lot of buffs, but her damage is not great. It is average or below average at best, and really, she could fit into either B or C tier for Season 1.

The Deadeye is a similar class to the Gunslinger, but slightly worse overall. It is a bit more difficult to play the class vs. the Gunslinger class, and it also tends to output slightly less damage, and this is why it is a tier lower.