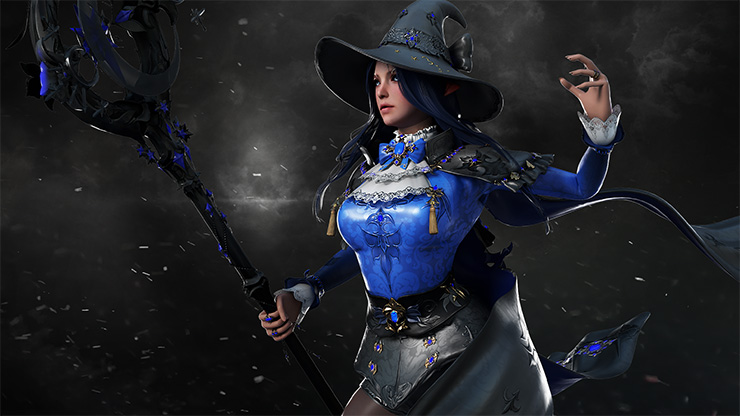 It was announced on the main Play Lost Ark website that they will be introducing the Sorceress class instead of the Summoner Class for the NA / EU Launch coming in Q1 2022.

This may come as a surprise to some, but players who have been following closely have expected the addition of the Sorceress for some time now.

The Sorceress has been added to the Mage classes page, and Summoner removed.

As we move towards launch, we have an exciting announcement to make about Lost Ark’s starting class lineup.

When Lost Ark launches in early 2022, the new Sorceress class will be available to players. The Sorceress will replace the previously included Summoner class in our starting class line-up, and the Summoner will instead come to Arkesia at a later date.

The Sorceress wields powerful magic based on three elements (fire, ice, and lightning) with spells that can deal area damage. They can easily handle multiple enemies helping them dominate the battlefield. Some of the Sorceress’ abilities include:

Our version of Lost Ark will still include 15 classes at launch, with additional classes coming to the game in future updates. When working with Smilegate RPG to select the starting class lineup, we considered the following criteria to ensure that our lineup was balanced, with a little something for everyone.

While our version of Lost Ark does not yet contain all 20+ classes, we wanted to ensure that we included content that is new and exciting alongside some old favorites of players. Sorceress is the newest class to be added to Lost Ark, having launched in Korea in August 2021, so we’re very excited to be able to share this class (and the Striker class) with our players!

A wide range of playstyles

It was important to us to ensure that we included a range of classes to suit the many ways that people like to play. While there are plenty of ways to DPS, we also made sure to include multiple support classes (Paladin and Bard) so that support players could have more options at game launch, as opposed to launching with just a single support class as the game has in other regions.

From the earliest days of Lost Ark’s announcement in the West, we heard players’ feedback about gender locked classes loud and clear. While not every class in the game currently has a male and female counterpart available, we wanted to be sure to include those that do early on. In the future, Smilegate RPG will be creating more counterparts for classes that are still gender locked, and we will bring these to Arkesia in time.

This won’t be our only update in December, stay tuned for more news later this month. As always, thank you for your support. Make sure to follow our social channels and PlayLostArk.com as we head toward launch. Here’s where you can find us:

See you in Arkesia!