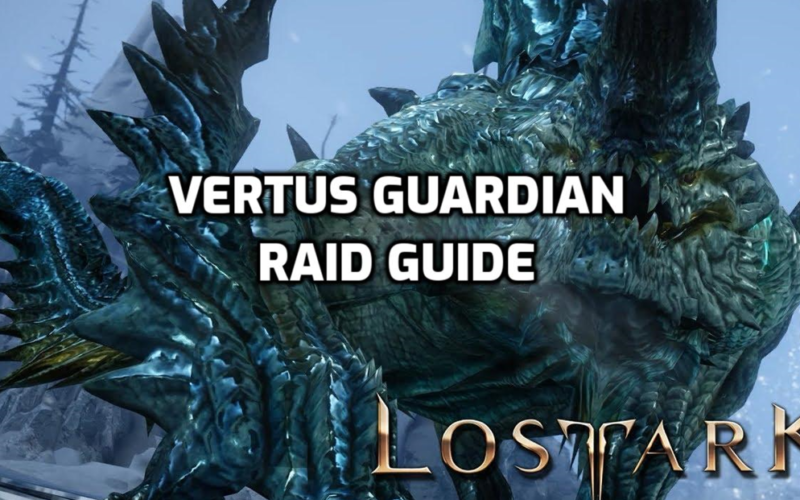 In this Lost Ark Vertus Guardian Raid Guide, we cover everything you should know about the boss encounter including how to find a group, boss fight strategy, and loot from Vertus.

You can sign up for a Vertus raid by opening the search for party screen and selecting Guardian Raids, as explained in the Lost Ark Guardian Raid Guide.

As Vertus is the fourth Lost Ark Guardian Dungeon boss, you are now familiar with how these dungeons and raids work, and you should get to at least item level 420 or higher before starting this raid. Make sure you put together a party before heading in.

Make sure you are all set up with the gear you want to use, the potions and battle items you will bring, and the Tripod skills you are going to want to use within the raid before signing up!

Vertus in Lost Ark will run away from your party twice during the encounter, at 70% Health and 40% Health. Both of these times, you will need to follow and find him again to continue the encounter.

During the fight, Vertus may engage into a recover position, where he will lay on the ground. During these times, continue to damage him while he recovers on the ground, and be aware that he may perform a jump backward out of the recovery position. You can technically cut his tail during one of the recovery positions, but it is generally not work doing, as it will bring him closer to his two special attacks being activated.

Vertus will turn red and glow, increasing his damage output.

A Player may get grabbed up by Vertus. If you are currently Crowd Controlled (CC’d), you are much more likely to get grabbed.

Counter Measures: The party should output as much stagger damage as possible if someone has been grabbed. This will help them break free from the grasp. If he is about to grab you, you can also dodge out of the way quickly before it finishes.

Vertus will move his tail to one side, then swipe across behind him, stunning any players that get hit by it. Sometimes, he will actually do a spin while tail swiping, covering more area with his tail hit.

Counter Measures: Watch for the initial tail swing to one side, then dodge out of the way from behind him before the swipe hits.

Standard double swipe. He will swipe in front of him once with each claw.

Counter Measures: Do not be in front of him. If you can see it starting and you have threat, attempt to dodge back away from him.

Vertus will submerge and go under the ice, into the water. A few seconds later he will emerge through the ice at a target player and damage them.

Counter Measures: The party should run away when he goes under the ice. It is possible to keep running together in 1 direction and Vertus will not catch up in time to damage during his emerge.

Vertus will shout and cause ice to fall from the sky in an AoE type fashion. If players are hit by it and frozen, they will have a higher chance of getting grabbed by the boss and further damaged.

Counter Measures: Upon seeing the shout and ice falling, avoid any ice from the sky.

The boss will perform a Kirby-like move where he breaths in and sucks players towards him, then he will breath out with an frost breath to damage and push them away.

Counter Measures: Stay away from his front.

This is a simply charge mechanic. The boss will charge at a player and thrash.

Counter Measures: If you aren’t in melee range when the charge starts, you should have time to dodge out of the way before he makes it to you.

Similar to the charge mechanic, Vertus will lunge at a player.

Vertus will shoot an Ice Orb out of his mouth in a direct straight line in front of him. He may turn to the target first, then let this shot out. As soon as it leaves his mouth it will stay in a straight line.

Counter Measures: If you see him cock his neck back like he is about to shoot the orb out, dodge out of the way from in front of him.

Vertus will perform his tail swipe then immediately charge a player. It will be difficult to know if this will happen, but keep your eyes peeled for the patterns above and avoid accordingly.

Vertus may shoot 3 Ice Orbs now instead of just one. Same counter measures should be in place. The orbs will continue in a straight line after they are shot out of his mouth, so watch and place your character out of the way of the trajectory.

The following is the potential loot table for killing Vertus in Lost Ark and finishing this Guardian Raid: